This is the shocking moment a horse tripped over with a broken leg before running on without its jockey during a race at the Cheltenham Festival today.

Five-year-old Sandsend, who was rated at 11/1, kicked up in the final furlongs – and had to be put down immediately after the 2.10pm race.

The horse, ridden by Katie Walsh, suffered the broken leg on the flat to become the 36th death at Cheltenham since 2007, according to animal rights activists. 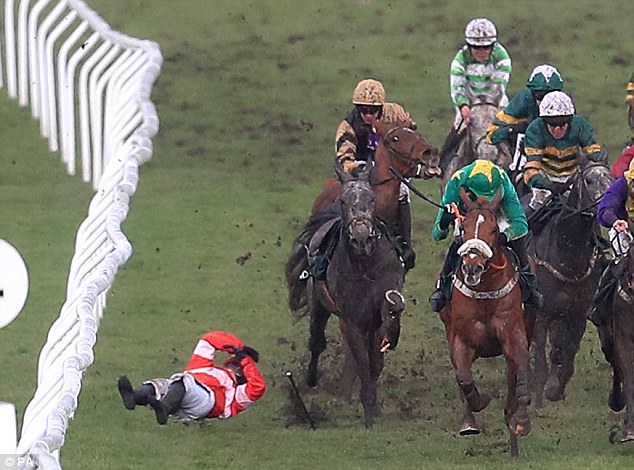 The rider, whose brother Ruby was ruled out of the festival on Wednesday after aggravating a recent leg injury, got up and appeared to have avoid injury in the fall.

But Sandsend had to be put down, and ITV Racing host Ed Chamberlin was left to tell viewers: ‘Desperately sad news. Our thoughts are with everyone connected.’

The incident at the Gloucestershire event happened during the Randox Health County Handicap Hurdle, which was won by Bridget Andrews on Mohaayed.

The rider was embraced by her partner Harry Skelton, who rode stablemate Spiritofthegames into sixth place, when the horses pulled up after the line. 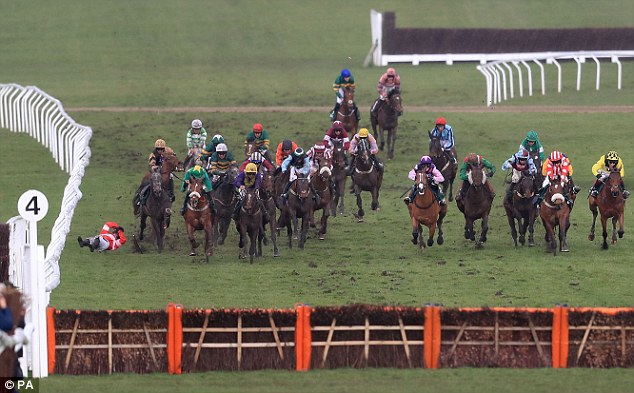 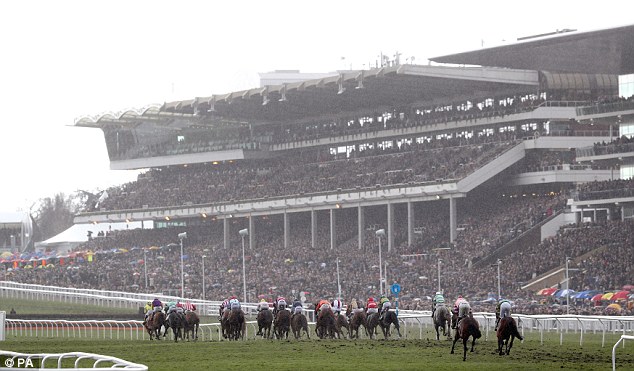 But the abiding memory for many viewers of the race will be the shocking footage of Sandsend pulling up, as he became the third horse to die at this year’s video.

‘The brutal leg break suffered by Sandsend was truly horrifying to witness. We can only imagine the agony and terror that he must have suffered, through no fault of his own.

‘How many more horses will have to die, before action is taken to stem the tide of deaths? We believe that the current regulator simply isn’t fit for purpose.’

It also left many viewers shocked, with Charlotte Easter tweeting: ‘Heartbreaking to see a horse break its leg like that, when he’s doing what he does best. RIP Sandsend.’

Ryan Longy added: ‘RIP Sandsend, I believed in you, I backed you and I am genuinely sad about your passing, a brilliant horse and a loss to racing.’

And another said: ‘Horrible to hear about Sandsend. Sickening to see the problems he suffered. The dark side to this game we all love. Very upsetting.’

A spokesman for the Cheltenham Festival has been contacted for comment today.

Sub-postmasters Rod and Pat Riach tried to take a holiday — once.  It was a long weekend more than 20 years ago, when their children were young, and turned out to be anything but the relaxing experience they were hoping for. ‘We had about 200 phone calls in the couple of days we were away… […]

Cheltenham News The casebook of Sherlock Bones! Meet the cocker spaniel who can sniff out lost cats and dogs

The old methods of detective work are still the best. Nothing beats house-to-house inquiries for collecting clues and local information. But, these days, the reaction I get on the doorstep is a bit different from that of my days in the police.One morning, a young woman in a dressing gown gaped at me when she answered… […]

A dad was touched by the way staff at his local John Lewis reacted to his daughter’s smashing a glass candle at the store. Phil Norris was with his two daughters at the department store in Cheltenham and was trying to keep an eye on them. Despite repeatedly urging his daughters, aged five and three,… […]